My review of  We Go Again by Michael Cargill 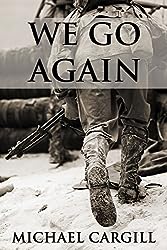 This novel is set in an era, the nineteen forties, that I love to read about. So why didn’t it quite hit the mark for me?

I have mixed feelings about this book and I’m not sure why. It’s obvious the author has done his research and the history of the Second World War is woven well throughout the plot. The story has a promising start; the characters are instantly developed in the first pages and the dialogue, on the whole, is believable. And there are some good ‘flat characters’; those who add to the backdrop, the locale, by their presence. The trouble for me was that I couldn’t decide who the protagonist was. Told from an omniscient narrator’s point of view the reader has access to all the internal thoughts of some of the characters – which is good – but the narrative switches so quickly from one to another that there isn’t time to empathise with any of them.A shame, because they all have such interesting potential.

Another problem, I think, is with the flashbacks. Although well written, there is no change in tense, no spacing; the reader is taken without warning to another time, another place. Although this does add to the back story of the characters, sometimes the flashbacks are so long it’s difficult to pick up the main story again. I found myself flicking back and forth in the narrative to remind myself where the soldiers were and what was taking place. Which was a shame because each section; the main story and the flashbacks are well written with gripping action scenes and descriptions that gave an immediate sense of place whether it is on the beaches of Dunkirk, inside a Lancaster Bomber, living in  the almost deserted village, whose inhabitants determinedly try to carry on with as normal a life as they can, the cold neglected building the soldiers take over or their contacts with the enemy

So why the doubts about We Go Again? I suppose it was that I never quite got lost in the story; I felt I was watching the action, rather that being there with the characters. I’m not sure that makes sense but I like to be absorbed by what I’m reading – to get that sense of ‘coming up for air’ from the fictional world.

After I wrote this review I looked for the book on Amazon and Goodreads. It has one excellent five star review on Amazon, and more on Goodreads, which goes to show that people can only read a book from their own subjective point of view. So I would just recommend that you give this book a try for yourself.

I will certainly give the other books that Michael Cargill has written a go.