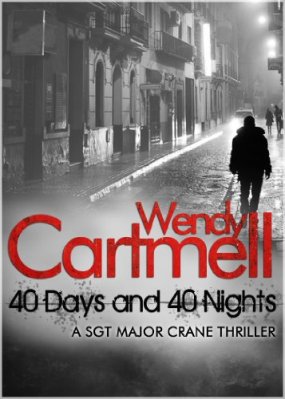 An evil game is in play… does Crane know the rules?
What could be simpler than keeping Team GB safe as they make their final preparations for the Olympic Games on Aldershot Garrison? But when the body of a soldier is discovered and supplies start disappearing, Military Police Detective Sgt Major Tom Crane knows that an altogether more sinister game is in play. As time ticks down, no one knows who the next target will be,or who the player is. But he’s there, hiding in plain sight. Far closer than anyone thinks…

It makes the hairs on the back of your neck stand up John Paul Davis Author and Broadcaster.
This was an excellent read and I can honestly recommend this. It is different, exciting and I enjoyed every minute spent reading this novel. Faith Mortimer, Author
Wendy Cartmell’s brilliant writing had me completely engrossed and fact and artistic licence blended perfectly Sharon Joan-Figurola

This is the second novel I’ve read by Wendy Cartmell. (I still haven’t read the first in the series, Steps to Heaven! – http://amzn.to/2ijsDGv). The novel I read was  Basic Element (Crane and Anderson Book 2 ) which I reviewed for  #BrookCottageBookTours:   http://bit.ly/2hZNHE9.

As I said then Wendy Cartmell has a clear writing style and although 40 Days 40 Nights has another complex plot that, it’s an enjoyable and easy read. By writing the story in the present tense the author succeeds in bringing everything into the moment; the reader lives alongside the characters as the plot unfolds.

And, as with  Basic Element, it can be read as a stand alone book.

The research for this book shines throughout; from the viewpoint of Crane and the hierarchy of the military forces, the old Gurkha, Padam Gurung, homeless and desperate, and the Muslim antagonist and his quotes and beliefs from the Qur’an (trying not to give spoilers here).

And woven into the plot is Crane’s home life; the imminent birth of his first child, the stress of his wife’s, Tina’s, health problems and his uncertainty of his future in the army.

All the characters are rounded, three dimensional and believable; as true in this book with their personalities, habits, characteristics as they were in Basic Element. The supporting characters,  Sergeants Billy Williams and Kim Weston, Detective Inspector Derek Anderson, are as consistent and  likeable (except for Crane’s immediate superior,Captain Edwards, who the author successfully portrays as an unimaginative stickler for the rules)

The dialogue is natural and believable and it’s easy to follow who is speaking, even without dialogue tags.An interesting point here; the Muslim antagonist directly speaks to the reader, using the second point of view, the ‘You’, which adds to the tension of his role and his intentions.

One of the author’s strengths in the book is giving a sense of place wherever the action is set, whether indoors or outside; the descriptions are evocative and easy to imagine.

As you have probably guessed I thoroughly enjoyed 40 Days 40 Nights and would recommend the book to anyone who likes a good murder mystery with a political and military overtone.