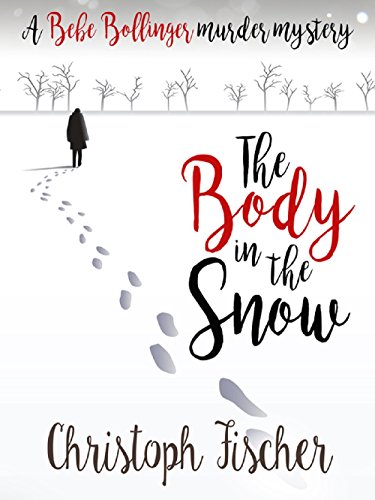 Fading celebrity Bebe Bollinger is on the wrong side of fifty and dreaming of a return to the limelight. When a TV show offers the chance of a comeback, Bebe grabs it with both hands – not even a lazy agent, her embarrassing daughter, irritating neighbours or a catastrophic snowfall will derail her moment of glory. But when a body is found in her sleepy Welsh hamlet, scandal threatens.
Detective Sergeant Beth Cooper has a string of unsolved cases to her name. Her girlfriend left her and she’s a fish out of water in rural West Wales. Things couldn’t get much worse – until the case of the Body in The Snow lands in her lap.

Can Beth solve the case and save her career and can Bebe make her comeback? All will be revealed in this light-hearted, cosy murder mystery by best-selling and award winning historical and crime fiction novelist Christoph Fischer.

Set against the background of a snowbound country lane in the small, isolated hamlet of Llangurrey in Wales   The Body In The Snow is a fun, easy read with a  plot that has has many twists and turns and a whole host of suspects, each carrying their own motives for the murder. A little slow in parts, especially at the beginning but still entertaining.

I loved the Prologue.

There is a a small interesting group of characters gathered together; neighbours, the divorced and rather’common’ (in Bebe’s eyes) neighbour,  Dora , prosaic Ian and controlling Christine; Detective Sergeant Beth Cooper whose outward demeanour hides a whole host of insecurities (I actually loved this character) and the  protagonist,  Bebe Bolinger, an ageing singer  with a huge ego, struggling to make a comeback and having to cope with her challenging and gossipy daughter,Helena. There is nice interaction between Bebe and Beth Cooper.

The chapters are mostly divided into each character’s point of view and told by an omniscient narrator (I always I like this method), although sometimes the chapters are sub-divided to include them all, which, as far as I’m concerned worked okay

I liked Bebe;  nicely rounded, with many amusing quirks but I did find both her  dialogue and internal dialogue too full of the name dropping of celebrities which I found distracting. The other characters are well portrayed and their  dialogue differentiates them well even when there are no tags.

On reflection I think I would have preferred a lot of the background of the characters to have been in flashback, perhaps in a change of tense, to differentiate the time. Some of the explanation of their previous lives came over a little like telling; interesting but detracted from the present story

The settings are well described, especially of Llangurrey , giving a good sense of place. This is especially so in the Prologue, when the murder takes place

The Body In The Snow is a good read but, to my mind, needs one more, tighter, edit to make this book even more enjoyable.

I looked up the definition of a cosy mystery. “Cosy mysteries are a sub genre of crime fiction in which sex and violence are downplayed or treated humorously, and the crime and detection take place in a small, socially intimate community.”  The Body In The Snow fits perfectly into this genre.