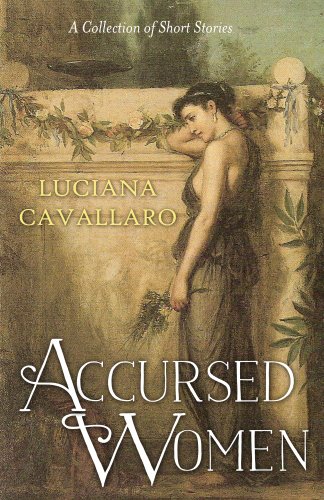 I gave  Accursed Women by Luciana Cavallaro 4 *out of 5*

Phaedra, a Minoan princess, marries out of duty and to safeguard her precious home. She falls in love with Hippolytos, her husband’s son and asks the Goddess Aphrodite for help. He spurns her affections.

The Trojan War, one of history’s greatest stories ever told. What if the legend as told is wrong? History is told by the victors, and facts changed to twist the truth. Is it possible Helen of Sparta never went to Troy?

Hera, Queen of the Gods, is the most powerful goddess on Mount Olympos. For the first time ever in a candid interview, Hera shares what it’s like to be a goddess and wife to Zeus, the King of the Gods.

Created by the gods as a gift to humanity, Pandora is the first woman on Earth. Did she know what Zeus intended when he presented an urn as a wedding dowry to her husband? Neither she nor Epimetheus knew what it contained, but they were told never to open it.

All Medousa wanted was a life of love and acceptance but one fateful night it changed. While she’s alone in the Temple of Athene tending to the sacred fire, Poseidon pays a visit. No human can stop an immortal from taking what they want.

I was lucky enough to win Accursed Women in a competition a while ago.

It is an anthology of character-led short stories  unravelling and illustrating  Greek mythology in a contemporary way.

This was an unusual read for me, partly because, not being  totally familiar with the original tales, I  first needed to read them in order to see how Luciana Cavallaro contrasts or equates the with contemporary society. And partly because the book is not something i would instantly look for. But I was intrigued… and then thrilled to receive it.

There are five short stories about five legendary figures but written as ordinary women  (‘ordinary’ being probably the wrong word, considering the strong writing!); Phaedra,  (not  so much the conniving, scheming woman as a someone who makes the most of her situation) Helen of Troy (less the character usually shown to have begun a war, more as a woman whose circumstances lead inevitably to strife),  Hera  ( to me a true feminist), Pandora (not the foolishly nosy woman  habitually depicted), Medousa (definitely not the hideous monster, more a naive girl).

Each tale told from the protagonist’s point of view, each threaded through with contemporary women’s fiction themes. The author has portrayed these characters in today’s culture in a powerful feminist way and brought them to life. And then given the stories a great twist

2 thoughts on “My Review of Accursed Women by Luciana Cavallaro”