Hi Jan, lovely to chat with you today.

May I start with asking you what process did you go through to get your books published?

This is an enormous question but a good one to start with! My first novel – written in 1986 – attracted the attention of an agent working for Andrew Mann Ltd. Anne Dewe was trying to set up her own company, Love Stories Ltd. It was a project aiming to champion those books of substance which contained a romantic element but were perhaps directed towards the more mature reader and consistently fell through the net in traditional publishing. Sadly, the project failed to get the right financial backing. Many years later my second novel, Wild Water, was taken on by Jane Judd, literary agent. Judd was a huge inspiration, but the book failed to find the right niche with a publisher. It didn’t fall into a specific category and narrated mostly from the male viewpoint, it was considered out of genre for most publishers and too much of a risk.

Amazon changed the face of the industry with the advent of self-publishing; opening up the market for readers to decide the fate of those previously spurned novels. I went on to successfully publish several works of fiction and short story collections myself, along with the professional services of a freelance editor, and a bespoke cover designer. Then in 2014, I received an offer to re-publish all of my material, which at the time consisted of 7 novels. I signed these to Accent Press, thinking a small publisher with a good reputation would hopefully increase sales and visibility for me. This didn’t happen and I was very disappointed in the quality of material produced and the lack of sales and marketing. Unfortunately, 2015 was a negative time for me, but with help from the Alliance of Independent Authors – who negotiated full global rights to be reinstated – I’ve happily returned to the freedom of independent publishing.

My books are available globally through Amazon as ebooks or paperbacks and locally, across all North Wales libraries and at Hinton’s of Conwy bookshop. I’m happier keeping the whole process in my control and since all my material is based in North Wales, concentration on the local aspect suits me very well.

I probably write closest to the romance genre, but there are huge misconceptions about this type of novel. I think it possibly stems from memories of the old fashioned type of Mills & Boon to the other extreme, that of Fifty Shades. The presumption that the romance genre is either hearts and flowers or a dirty book with handcuffs featuring every other page, is common. There’s also a certain amount of disdain.

Fiction which does not fall neatly into a pigeon hole has always been the most difficult to define. In the old days such books wouldn’t be allowed shelf space if they didn’t slot immediately into a commercial list. But genre has become blurred and blended. Publishers hate this, but as an independent it’s possible to write the book that begs to be written without the restrictions placed on authors by agents and publishers.

I’ve been described as a combination of literary-contemporary-romantic-comedy-rural-realism-family-saga; oh, and with an occasional criminal twist and a lot of the time, written from the male viewpoint. No question my books are Contemporary. Family and Realism; these two must surely go hand-in-hand. So, although you’ll discover plenty of escapism, I hope you’ll also be able to relate to my characters as they stumble through a minefield of relationships. This is why I hesitate to use the word romance. It’s a misunderstood and mistreated genre in the literary world. If romance says young, fluffy and something to avoid, maybe my novels will change your mind since many of my central characters are in their forties and fifties. Grown-up love is rather different, and this is where I try to bring that sense of realism into play without compromising the escapism.

Do you write more by logic or intuition, or some combination of the two?  Summarise your writing process.

I used to make a crazy amount of notes and generally feel stressed about the process. Now, I find it develops better by instinct and intuition. I always know how it want it to end and how I want the characters to develop. If I over-plot, the writing becomes too stilted. I like to discover emotions and motivations along with the character, and I can’t do that if it’s all predetermined.

Landscapes, music, horses, history, the complexities of people’s lives and how the future is shaped by what’s gone before.

The only historical event I can remember with any accuracy is good old 1066 and The Battle of Hastings. At school I was hopeless at dates, in fact anything to do with numbers, but I used to love history because sooner or later it usually involved writing essays. Now though, I suspect there may be more to it. The longer I live and the more places I visit in the world, the more connected I feel to my roots, or more specifically my spiritual home, Snowdonia.

Twenty years ago we moved from Cheshire to North Wales. Although Cheshire has its history and pretty rural surroundings aplenty, Wales is far more extreme in both aspects. The castles and the rugged hillsides strewn with stone settlements, druid circles and Roman roads bring out the historical muse in me. To think that I am treading the same path as someone who lived in the Iron Age, is both fascinating and humbling. Snowdonia kick-started my stalled obsession with writing in a very positive way. 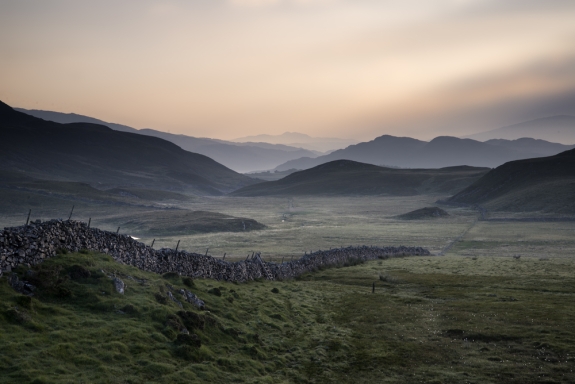 I love the way ancient history here is often blurred by myths and legends, shape-shifters and superstitions. Rich then, in history and romance and easy enough to blend both, with a touch of fantasy and suspense. Especially so when the winter sun is low in the sky, sending out early shadows to creep across the crooked stones of derelict homesteads and graves. And late sunsets in summer, when the scudding clouds floating in a fiery sky take on the shape of dragons and rearing horses. Or maybe, when the druid’s circle is shrouded in mist and… can you hear something? Like the clink of marching armour and the clash of swords…there’s something moving out there, or is it just my imagination?

So although I write contemporary fiction, I’m very much inspired by a historical landscape.

What are some day jobs that you have held?  If any of them impacted your writing, share an example.

Every single job I’ve ever had has been useful from a writerly or research point of view. Two well known high street stores in particular (both of which I loathed working in), supplied endless fodder for Kate’s despised job in Silver Rain. I loved being able to get my own back and behave as I’d really wanted to do all those years ago – through the character!

The most influential has to be estate agency. I worked for many years in property, and this knowledge formed the base for my central character in the Wild Water series, Jack Redman. I wanted to create a main character who didn’t have an especially glamorous job, an anti-hero, a lovable hapless male who kept getting it wrong.

I worked in a pharmacy for a while (I’m saving that one!) and then a short stint at home caring, which gave me valuable insight into a tough job, something I discovered I couldn’t do… but the character of Linda in White Horizon, took on these memories in her own way, warts and all. This area of personal knowledge created a believable background for her leap into nursing.

And then the horses. A lifetime of being around horses and once upon a long time ago – a pony trek leader – has allowed me to develop an equine series which is very much rooted in over forty years worth of experience around riding schools. The characters I’ve met along the way in this industry have been the most incredible mix of extremes, from gypsies to rich racehorse owners – collectively, a wonderful example of English diversity and eccentricity.

I do read them. I think there’s sometimes rather too much emphasis placed on them, and then they become too powerful. Some new authors use them as validation or a yardstick to see if they’ve got something right, but the best place to seek this sort of advice is well before the book is published. Reviews on Amazon or Goodreads represent opinions of the general public and it’s as well to be prepared for rejection, or simply the fact that not all readers will connect to your novel, no matter how technically perfect it may be. I think overall, it’s a poor system, open to much manipulation and best taken with a big pinch of salt.

What do your plans for future projects include?

I’m currently half-way through Strawberry Sky, which is the third part of the equine series. After this I do have a Christmas novella partly planned out in as much as it documents my year with a publisher. It follows the story of an accountant who is sacked for writing a novel at work. It will be mostly funny but there is a dark thread in there as well, which is my trademark! I do like to mix dark humour with drama. And I’d like to move into non-fiction – I have a real hankering to write a book of local walks with lots of historical detail and photography.

Thank you for being here today, Jan. Please let us know how we can discover more about you and your books.

That’s all for now, folks. Next week I’ll be chatting to Terry Tyler: http://amzn.to/2jTfp3i. , a prolific Indie writer and one of my favourite authors.

19 thoughts on “My Series of #FamilySaga Authors. Today With Jan Ruth #authors”