Over the last couple of months I’ve been chatting with authors who, like me, write Family Sagas, (#familysaga) a genre that can cover many countries, years  and cultures.I am thrilled that so many excellent writers have agreed to meet here with me and I’ll be continuing into July. I’m sure you’ll find them as fascinating as I do. All I can say is watch this space. Your TBR list of books will be toppling over!!

Welcome Caroline, and thank you for being here today.

Thank you for interviewing me, Judith.

Firstly, please tell us how came to write a family sagas?

I didn’t set out to do that at first. When I wrote my first historical romance I created four friends, envisioning boyhood backstory for them. Once I created my first characters and began to write, however, their web of family and friends grew quickly. When I finished the four books I had planned for my Dangerous series, there was a brief moment in which I wondered what I would do next. Characters from all four books, the children and relatives of my heroes and heroines began clamoring to have their stories told. They are standing in line with little patience.

The obvious next question is, do your characters seem to hijack the story or do you feel like you have the reins of the story?

It is a bit of both. They speak up in snatches and then go elusive on me. I often envision the ending first, but I have to figure out each main characters turning point point, that spot in the center of the book where they decide to make a change that impacts the entire rest of the story. James Scott Bell calls that the “mirror moment.” Usually once I get that the characters and I are on good enough terms that the story picks up speed, as if they say, “Ah, you understand me now. Let’s tell this story.”

Is your next series open-ended do you have a pre-set series arc?

My series title is Children of Empire, and all the books will be set just before or in the early years of Victoria’s reign.  Long term it is open ended, but I envision sets of three with interrelated series arcs. The first set involves three cousins. The Reluctant Wife is Book 2 of that set. Their lives have been torn apart by lies and deceit (it won’t suprise anyone that a woman was involved) and they have been driven to the far reaches of the empire. Over the course of three books they struggle to find their way home. I mean that literally in some cases and metaphorically as well. The cousins all appeared first as boys in my holiday novella, A Dangerous Nativity. The sons and daughter of the hero and heroine of my first book Dangerous Works are beginning to speak loudly now, asking for their arc to be next. I understand they are all scholars of some sort. At least one is an archaeologist and another wishes to study the plant life in far off Australia.  Time will tell what we decide to do.

What is the toughest criticism given to you as an author?

I had a harsh review recently, that gave me pause. Each of my books is also a standalone romance. I do not write particularly explicit scenes, but my belief is that in fictional romance as well as life, sex happens, it binds people together. I try to focus my sensual scenes on relationship and emotion, and generally those scenes occur late in the book, deep into the relationship. One book is an exception.  An impulsive indulgence occurs early in Dangerous Weakness because my goal with the hero (who in the other books was always in perfect control) was to have him fail, require him to seek forgiveness, and end with him begging for help. The reviewer couldn’t make it past the rather abrupt sexual episode and told me so in no uncertain terms. I think authors of romance are often between a rock and a hard place on this subject. Too much? too little?  Even attempts to add heat ratings fall flat, because peoples comfort levels differ. I’m still chewing on that one.

What has been the best compliment?

I love to hear that the story surprised them, that twists were unexpected, that the unusual setting delighted. Best of all I like to hear, “I can’t wait to read the next one.”

What do you like best about this next book?

The Reluctant Wife begins in India and ends in England; the center is a journey. I love journeys. The hero, a clueless male with more honor than sense, never stops trying to do the right thing, even if he occasionally gets confused about what that is. The heroine is a courageous wounded duck with more love bottled up than she finds comfortable. They fall in love in spite of themselves and have to figure out how to make a life together. My favorite character, however, is the hero’s daughter, Meghal, a precocious and intrepid six year old who has spent her  whole life in a small village in Bengal, but who isn’t fazed  by  steamships, camels, wealthy cousins, or villainous arsonists. She believes family matters most and makes sure her father knows it too. One of my beta readers has already said she can’t wait for Meghal’s story. That one will happen around 1850. Hmm—another voice calling for a story.

Have you thought about joining with another author to write a book?

If you mean to write a single title novel? No. I have participated in anthologies, however. In fact, my novella “Lord Edmund’s Dilemma,” a sweet Regency, will be in A Holiday in Bath, which comes out May 9. With my friends the Bluestocking Belles, I am part of an annual holiday anthology. A Dangerous Nativity was in one of them.

What do your friends and family think of your writing?

My husband is delighted to see me happy and productive and home. Some folks who knew me as a technology manager are astounded. Some of my cousins actually read the books and share them with people. That tickles me. Some, of course, ignore me, and that’s fine. Historical romance isn’t everyone’s cup of tea.

Do you write alone or in public?

Alone.  My office has windows all around so I can stare out at trees and birds.

Music. Each book has its own mood. This one lent itself to movie sound tracks. I listened to a lot of Titanic, Braveheart, and The Last of The Mohicans.

Do you set goals?

I try for 1-2000 words a day first thing in the morning. it is hard to keep to it when I’m promoting a new release.

My next book, Holiday in Bath. 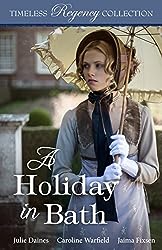 The Unexpected Wife is due for October release.

34 thoughts on “My Series of #FamilySaga Authors. Today With Caroline Warfield#MondayBlogs”