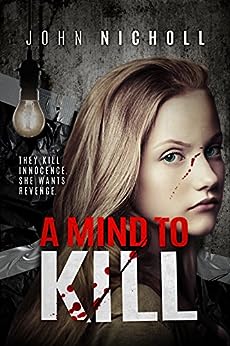 When Rebecca’s childhood abuser escapes justice, it sets her on a path to revenge, revenge on any man who preys on the innocent.

Twenty-three-year-old Rebecca poses as a child online and sets her trap, luring one sexual predator after another to their deaths.

When a severed head and other body parts are found washed up on a windswept estuary beach, the police begin their investigation.

If you’re looking for a page-turning book you won’t be able to put down, discover John Nicholl’s stunning new thriller today.

I received an ARC of A Mind To Kill  from the author in return for an honest review.

This is a deeply disturbing book that deals with child abuse, murder and gruesome scenes. I’ve read and reviewed books by John Nicholl before: Bully Boy Blue  and Portraits of the Dead. Both dark, gripping stories where the author shows his knowledge of police matters and certain kinds of crimes.  For me A Mind To Kill is his most grim yet. It is obvious from the book blurb that it will be macabre in parts; readers are warned. There are graphic scenes that some may want to skim through. But it has to be borne in mind that these have a reason to be there; for revenge against one of the most horrific and vile crimes; child abuse.

That said I will review as usual.

In the author’s previous books there has always been one character, the protagonist that I have felt some empathy for, some understanding of their actions and their mindset.  I was disappointed that I didn’t have this choice in  A Mind To Kill . Although I grasped the anger and passion for revenge that drives Rebecca, and recognised what happened to her in childhood has coloured her whole outlook on life, for me it is too one dimensional. I would have liked much more background of her previous life inserted somewhere; if only glimpses of her childhood after the abuse, her teenage years. Something that brought her to this point in her life which explains her relationship with her mother especially. I would have liked to have a flashback or two to see where the justice system failed this family and the emotions that the ordinary police must have felt. (I do like flashbacks!)

And, having met Inspector Gravell (Grav) in a previous book, I was disappointed in the change in him. I know, having lost his fellow partner, Detective Sergeant Clive Rankin, he would be a more embittered and cynical character but he is portrayed  as a completely unpleasant man in this book. His previous bluff yet compassionate side is well hidden.

Mostly the dialogue is realistic and plausible and differentiates the characters but every now and then, especially in the conversations between Rebecca and her mother I found it difficult to realise who was speaking. And, in other parts of the book, there is what I call ‘head hopping’ between characters. The spoken and internal dialogue between  characters jumps from the point of view of one of the characters, usually one of the two main characters to the mind of someone else, sometimes even a minor, flat character who adds little to the main plot or only appears once in a short side plot.

Beyond an internal setting of one room, graphically and frighteningly described, there are few external settings, But these are well written and give a strong sense of place.

A Mind To Kill  is an extremely dark psychological thriller; the strong emotions, the vengeance, the hatred, the evil radiates throughout the story . The boundaries of right and wrong blend and become difficult to  identify with. It’s a book that is both contentious and provocative. I would recommend it for readers who understand that there is true evil in the underworld of vile child abuse… and have a strong stomach.