Hi Terry, good to see you here today. Please tell us first,what is the ultimate goal you hope to achieve with your writing?

To write something so amazingly good I can’t believe I’ve written it.  I doubt that will ever happen, though; even if it did, I’d probably still spend half my time thinking it was rubbish.  Maybe there never is an ultimate goal with anything creative, as there is always more, a different direction in which to progress.  You never get to a point when you think, ‘right, I’ve done it, I’ve got there, so I’ll stop’.

People often ask writers, ‘is your main character supposed to be Joe/Bob/Steve?’  But he rarely is; writers make stuff up.  That’s what we do.  Experience fuels the imagination, that’s all; I’d say my characters are 80% my invention, 20% taken from real life.

What is your work schedule like when you’re writing?

I write on every day that it’s possible to do so.  Aside from family commitments, anything else has to fit round it.  I give myself deadlines for completing each draft, just because I work better that way.  When the book’s gone to my proofreader, I catch up on stuff I need to do (guest blog posts, emails, etc), and kid myself I’m going to do some jobs around the house.  However, I’ve always got the next book waiting in the wings (ie, my head!) and so the process begins again, and the bedroom remains unpainted.

An opening chapter with threads that make you eager to know what’s going to happen.  Characters that jump off the page and into your thoughts; if you don’t care what happens to them, you have no impetus to keep reading.  A feasible plot, with unexpected developments that don’t seem as if they’re just there for the sake of making ‘plot twists that will blow your socks off’ claims on Amazon.  Resolution for each aspect of the story (unless part of a series).  An ending that stays with you after you’ve read it.

How many books have you written? Which is your favourite?

Twenty-five (I think).  Fourteen of them are published, with another finished and in the preparation process (Lindisfarne, which may be out by the time this post appears!).  I can’t name one favourite, but I have special affection for the most recent, Tipping Point and sequel Lindisfarne, because they’re part of a series, which I think about all the time!  My other favourites are The House of York and Last Child, family sagas inspired by events during Tudor and Plantagenet times.

I would never describe my own book as a ‘must-read’; that’s for the reader to say, not me!  The Project Renova series, of which Tipping Point is the first book, is about a global pandemic, and also, initially, about how public opinion is manipulated by the media.

I’ve wanted to write about life after the collapse of 21st century civilisation for ages, because I’m a bit obsessed with all things post apocalyptic, but I wanted to ‘keep it real’, as much as possible.  Vicky is an ordinary woman living in a small town, with a teenage daughter, Lottie.  As Vicky says: ‘How to manage without flushing loos is never mentioned in TV shows or films about life after global disasters.  I suppose viewers don’t want to see their favourite hunky road warrior sidling off into the woods with a roll of Andrex.’

Does your book have a lesson? Moral?

It’s your imagination, your fingers on the keys.  Sometimes a character will turn out differently from how you intended, mostly because unexpected ideas about how to develop the character appear while you’re writing, but it’s still you in the driving seat.  I don’t go in for all this ‘I wanted to make Sebastian a modest shopkeeper, but he just wasn’t having it!’ stuff.

When did you write your first book and how old were you?

I first wrote a novel in 1993, when I was thirty-four.  I might get it out and have a cringe-athon some time.

If I have, I can’t think what they are.  Or maybe I’m just not telling you.  Smiley face with wink.

I haven’t got one.  I’m not that interesting.  I just sit down at my desk and get on with it.

Oh dear, this is where I’m supposed to reveal all my fascinating and unusual hobbies, isn’t it?  Thing is, I mostly just write, and when I’m not, I do the same relaxation/leisure time stuff as most people.   You know, watch stuff, read, go for walks, clean the house.  Okay, I’m lying about the last one.  I read a lot and review books on my book blog, and for Rosie Amber’s Book Review Blog.

I’ve recently become a vegan.  It’s difficult, but at least it stops me raiding the biscuit tin.  I can see myself eating vegetable stir fry with Quorn for dinner every night; I’m not very interested in cooking.

Terry Tyler is the author of fourteen books on Amazon, the latest being ‘Tipping Point’, the first book in her new post apocalyptic series.  She is proud to be self-published, is an avid reader and book reviewer, and a member of Rosie Amber’s Book Review Team.

Her next book, ‘Lindisfarne’, the sequel to ‘Tipping Point’, should be available in September 2017.  She lives in the north east of England with her husband, and is still trying to learn Geordie 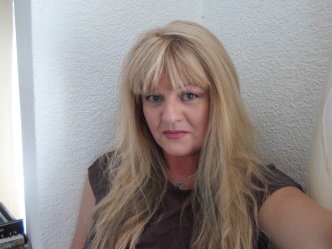 Lindisfarne, to be realised in September 2017.  Sequel to Tipping Point.  Also Romantic Suspense

Patient Zero, hopefully ready to publish in December 2017.  Outtake short stories   related to Tipping Point, Lindisfarne and Book 3 of the series, yet to be written.

16 thoughts on “Interviewing One of my Favourite Authors; Terry Tyler and Introducing her Latest Novel, Tipping Point: #SundayBlogShare”