The title,  A Hundred Tiny Threads,  is taken from a quote by Simone Signoret (the French actress of cinema and a writer in her later years. She died of cancer in 1985 at the age of 60. The full quote is, “Chains do not hold a marriage together. It is threads, hundreds of tiny threads, which sew people together through the years. “ 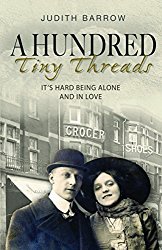 A Hundred Tiny Threads  is the story of the parents of protagonist in the Howarth  trilogy, Mary Howarth. I thought I’d finished with the characters when the last book ended. But something niggled away at me until I realised that until their story was told; their lives explained, the narration was incomplete. The story takes place during a time of social and political upheaval, between the years 1911 and 1922. It’s set in Yorkshire, Lancashire and Ireland at the time of the Suffragettes, the  first World War and the Uprising in Ireland.

I knew the years I wanted to cover so one of the obvious difficulties was the timeline. I needed to make sure that those characters, already existing in the trilogy, fitted correctly into those decades. And the two main characters, Winifred Duffy and Bill Howarth, are already fully formed, rounded characters in the previous books so I wanted to show how the era they had grown up in; the environment, the events, the conditions, had shaped them, moulded them into the characters they’d become.

I actually wasn’t going to write a trilogy. The first of the three books is called Pattern of Shadows

I’ve often told the story about how I discovered that the first German POW camp in the UK was a disused cotton mill in Lancashire. And how, because of my memories; of the noise, the colours of the cloth, the smell of grease and cotton when my mother worked as a winder in such a mill, I wondered what it would be like for those prisoners.  I imagined their misery, loneliness and anger. And I wanted to write a story about that. But research in a local history library; finding sources of personal accounts of those times, from ex-prisoners, the locals and the guards of the camp, proved that it wasn’t quite as bad as I had imagined. There were times of hope, of love even. So then I knew I needed to write the novel around a family who lived in the town where the camp was situated. Who were involved in some way with the prisoners.

The trouble was that once the story was told there were threads that needed picking up for the sequel, Changing Patterns 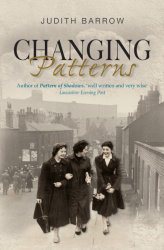 And after that book was completed I realised that there would be repercussions from the actions of the characters in the first two stories that would affect the next generations. And so I wrote Living in the Shadows 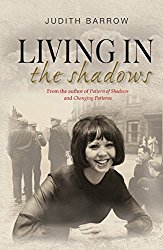 It’s been hard to let go of some of the characters, especially the protagonist, Mary. But in a way I’m still staying in their world. When I’d sent A Hundred Tiny Threads to  Honno , my publishers, for the final time, I wrote and Indie published an anthology of eight short stories called Secrets.

These are the stories of some of the minor characters in the trilogy. At least three of these are crying out for their life stories to be told. I’ve already started on two of the characters: Hannah Booth, the sour mother- in- law of Mary’s sister, Ellen, who appears in Pattern of Shadows, and on Edith Jagger’s tale; the woman who becomes the gossipy and sharp-tongued next-door neighbour of the protagonist, Winifred, in the prequel and previously in the trilogy.

As is often the case, how we finish up in life is shaped by our past.  And both women have a dark secret.

Perhaps, all along, I knew I was not going to walk away from these characters. Perhaps they knew they wouldn’t let me.

Please click  The Welsh Books Council for A Hundred Tiny Threads: Wales Book of the Month for January 2018.

Click here  for my trilogy and prequel available from Honno.

All my books are available from: