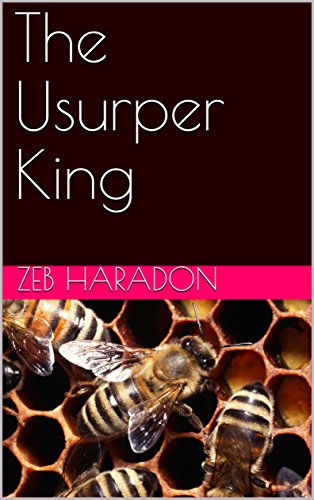 The Usurper King takes place in an alternate universe where the serial killer Ted Bundy was never apprehended and is now running for president in 2016.

Jim, a sufferer of a hybrid computer-biological virus that causes premature aging, tries to pay for his treatments by winning money on the game show ‘Guts!’, which has contestants competitively predict the future by reading animal entrails.

As Jim begins to find omens in the entrails of Bundy’s victory, and details of Bundy’s murderous past are uncovered, Jim and another contestant take it upon themselves to stop his ascent to power before it’s too late

For once I’m stuck on how to review a book. Not only because I’m not sure how to describe the genre; The Usurper King crosses both fantasy, humour and political thriller; all mixed up together with some humour that more than borders on satire. The author has a quirky writing style that I admired and there are some brilliant observations on the human condition. Yet parts of the story did make me cringe and skip small sections; those parts were the descriptions on extispicy: (the practice of predicting the future or reading omens by reading the entrails and liver of animals. And yes, it did exist; I looked it up. And yes, I do know I’m a wimp.

But here I’m reviewing the book itself so I’ll break it down. As I said Zeb Haradon can write, it’s a fascinating, slightly convoluted plot told in the protagonists’s first person point of view,  Jim Galesh; a forty year old, divorced alcoholic who has contracted a disease called TAP: Technologically Acquired Progeria, that is ageing him  quicker than normal. This character jumps off the page, he is so rounded and believable, in what is otherwise a fantastical scenario. And, generally, the other characters are multi layered as well.

The dialogue is good and more than fills out the protagonist’s character.There is a good sense of place throughout. And I found the ending clever and a total surprise,

A couple of problems that occurred in places: the pacing of the plot was slightly erratic, and there are punctuation and syntax errors throughout.

But, to end on a positive note and to emphasise comments I made earlier; Zeb Haradon is an author to watch out for. I recommend The Usurper King for its originality, its sardonic observations of life and a great writing style