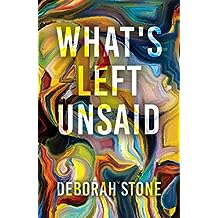 I was given a copy of What’s Left Unsaid by the author as a member of Rosie Amber’s Review Team #RBRT, in return for an honest review.

Sasha is just about managing to hold her life together. She is raising her teenage son Zac, coping with an absent husband and caring for her ageing, temperamental and alcoholic mother, as well as holding down her own job. But when Zac begins to suspect that he has a secret sibling, Sasha realises that she must relive the events of a devastating night which she has done her best to forget for the past nineteen years.

Sasha’s mother, Annie, is old and finds it difficult to distinguish between past and present and between truth and lies. As Annie sinks deeper back into her past, she revisits the key events in her life which have shaped her emotionally. Through it all, she remains convinced that her dead husband Joe is watching and waiting for her. But there’s one thing she never told him, and as painful as it is for her to admit the truth, Annie is determined to go to Joe with a guilt-free conscience.

As the plot unfurls, traumas are revealed and lies uncovered, revealing long-buried secrets which are at the root of Annie and Sasha’s fractious relationship.

There are some books that grab you from the first page, even the first paragraph. What’s Left Unsaid did just that for me:

“If Annie had just been honest with me, we might have avoided much of the ugliness which followed… but she wasn’t and we didn’t…”

How could I resist? I didn’t! It helped when I realised the story is told in one of my favourite formats; it’s written from different points of view under the name of three characters: the protagonist, Sasha, her mother Annie and her late father, Joe. I especially liked Joe’s objective viewpoint that balanced out the subjective viewpoints of the other two characters as they describe the complex and difficult relationship between them. Even so, the question hovering throughout the text is what is truth and what is lies. It’s a cleverly written narrative and I loved the writing style of Deborah Stone; she moves from character to character, slipping easily into their voices, alternately moving the reader to understand each with empathy, yet being able to see the flaws in them as well.

The plot is tense and tightly woven, moving at different paces to reveal the secrets held for years held by this family. There are many themes: family secrets and deceptions, emotional power struggles between characters, dementia, miscommunications, understandings and forgiveness. All delicately intertwined throughout the text.

I always think that, when we reach a certain age we are formed by the things that we have done, what has happened to us, how we have been treated and how we have treated others. In What’s Left Unsaid the flashbacks to Annie’s earlier life reveal her vanity, her prejudices of others and her jealousy of her own daughter. As a reader I was torn between disliking much of what she was and yet having compassion for what she has become; a woman in the throes of dementia. The flashbacks of Joe’s earlier life show his Jewish family’s struggles to move from a totalitarian Russia at the end of the nineteenth century to the North of England where they face fascism and suffer poverty that they fight to escape, much as they have escaped from an oppressive regime.

The characters are many layered. The protagonist, Sasha is living in a loveless marriage and cannot understand either her husband, Jeremy, who has a secret of his own or her son, Zac, typically a monosyllabic, hormonal teenager. She has no closeness with her mother yet is forced to be deeply involved in her life. The author cleverly and subtly reveals the tensions hidden in Sasha, much as she does in all the major characters.  Her internal dialogue initially shows her timidity, her nervousness, in the way she approaches her family. Yet there is also exasperation and even anger. And this comes out more and more as the story progresses.

Joe’s words, spoken from beyond the grave, are wise and, as I said earlier, objective. I felt they gave a distanced reflective view on human nature as a whole. Yet, through the dialogue and thoughts of the other characters, his personality in life is exposed to have had had the same flaws and weaknesses as their own.

Even without the story being allocated to each character the reader is left in no doubt who is speaking; each have their own distinctive voice.

The narrative describing the settings give a good sense of place and provide an interesting background to the story.

What’s Left Unsaid is a complex and poignant read. Thought provoking and absorbing it left me reflecting on the complexities of marriage and families. I would recommend this to readers who enjoy well-written family sagas