I was given this book by William Savage as part of Rosie Ambers Review Team (RBRT) in return for a fair review. I’d like to thank them both. 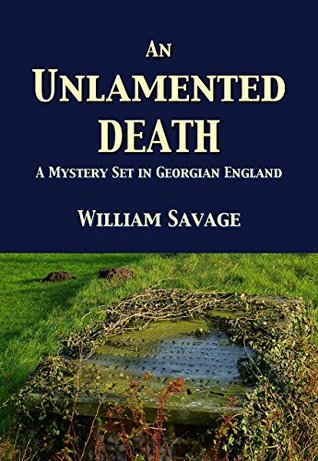 I have given An Unlamented Death: by William Savage 4 of of 5 stars.

I was intrigued by the title and subtitle of the book by William Savage: An Unlamented Death: A Mystery Set in Georgian England (Mysteries of Georgian Norfolk Book 1). It’s been a long time since I read a novel set in Georgian England and I do like a good murder mystery. I’m normally a slow reader but this book took me a long time to read because of the density of the language. The expressive prose reveals the many traits of the well-rounded characters that exist within the confines of the setting. The setting, a Norfolk village on the coast is the perfect place for a murder mystery, political corruption, robbery and smuggling. And throughout the book the social, religious and political constraints and divides of the eighteenth century are subtly shown as the plot is revealed.
The dialogue, with the long sentences and clauses, is representative of its time and social etiquette. It’s obvious that the author has researched well. Told from a single point of view omniscient narrator the reader follows the thought processes and actions of the protagonist, Adam, a young doctor building up his list of patients. I liked the way this character is slowly brought to life for the reader.
If I had any problem with this novel it was, oddly enough, with that which I most admired; the prose. Almost all the story is told through dialogue, both externally and internal. Sometimes it borders on telling rather than showing, and sometimes is a little too drawn out, with minimal action. But, as I’ve already said, William Savage has a wonderful writing style; perfect for this genre. Overall I enjoyed An Unlamented Death and would recommend it.