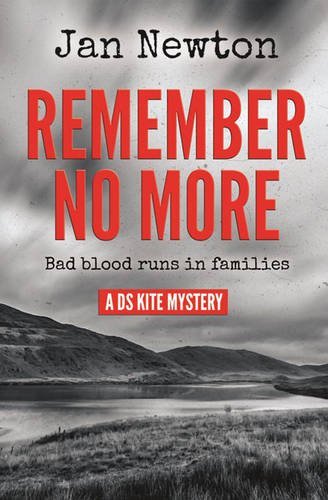 Newly promoted DS Julie Kite is at a crossroads.  Her husband’s desire for a different life takes her away from urban Manchester and its inner city problems to tranquil mid-Wales. It is to be a clean slate for them both. On her first day at Builth Wells police station, Julie is thrust unexpectedly into the centre of an investigation into a suspicious death in a remote farming community.

Back in Manchester, Stephen Collins is set free from HMP Strangeways.  Bible in hand he makes his way to mid-Wales, the scene of the heinous crime for which he was imprisoned, in order to confront those who had a hand in his incarceration.

DS Kite to confront her own demons as well as those of her rural community and, ultimately, to uncover the lengths to which we’ll go to protect our families…

This is a plot with many twists and turns. The depths of the historic layers are slowly revealed alongside the introduction of the protagonist, Detective Sergeant Julie Kite and her struggles in both her work and home life. I loved the author’s ability to balance  – and juggle – both, and to keep the reader interested throughout the story. For me the genre of crime fiction can only work if there are false leads, clues that baffle or can give a ‘eureka’ moment. Remember No More does all these.

The story is told from an omniscient point of view, weighted mostly from the protagonist’s viewpoint and this works, as I have the feeling we will be hearing more from DS Kite. But there is also an insight to the other characters and this adds depth to the them; to their struggles, their loyalties, their place in both the community and their families. The characters are well rounded and it is easy to empathise with some of them – and to recognise the weakness and malevolence in others.

The dialogue works well, differentiating the Welsh born characters and contrasting with the accent of Julie Kite and other Northern England characters. The internal dialogue gives greater perception to them all. I liked the slow internal acceptance of the protagonist’s change of life and work situation from Northern England to Wales.

I think one of the great strengths in the author’s writing is the descriptions of the settings. If I can’t picture the world the characters live in, it doesn’t work for me. Jan Newton  bases her book in mid Wales. The details are authentic and give a tangible sense of place. I admired  her ability to bring the sense of place alive. I was immediately drawn in by a very early description: ” the road was hemmed in either side by reeds and grasses, which had been bleached by the winter’s snow and were still untouched by the spring sunshine…”.And later, “the car rattled over a cattle grid and a vista of villages and isolated farms opened up below them as the road hair-pinned to the right, before descending along the edge of a steep valley. the tops of the hills were the pale browns of moorland, but the valley bottoms were already lush with meadows and hedges.” Good stuff!!

If I had any reservations about the story it would be about the relationship between the protagonist and her husband. But this is only because I wanted to know the background of their marriage. Perhaps this is just the author being enigmatic; maybe this is something to be revealed in the next story of DS Julie Kite.

A couple of last mentions; I love the cover, the image is wonderful, I feel it is the scene that the buzzard sees in the Prologue. Oh, I do like prologues!

I enjoyed reading Remember No More. It’s an extremely good debut novel and I do hope this is not the last we hear of DS Julie Kite and her collegues.

This is  a book I have no hesitation in recommending to any reader who enjoys a good strong crime mystery.

Jan grew up in Manchester and Derbyshire, spending her formative years on the back of a pony, exploring the hills and moorland around her home.  She lived and worked in London and Buckinghamshire for 19 years until moving to Wales in 2005, where she learnt to speak fluent Welsh. Jan has won several writing competitions, including the Allen Raine Short Story competition, the WI Lady Denman Cup, and the Oriel Davies Gallery competition for nature-writing. She has been published in New Welsh Review.

A WORD FROM JAN NEWTON

I wrote my first novel when I was seven, all about the adventures of a little green one-legged spaceman, who crash-landed his tiny ship in my north Manchester suburb.   We had plenty of adventures, Fred and me, filling fourteen Lancashire Education Committee exercise books and earning me two gold stars in the process.  But when I was eight, a rotund Welsh Mountain Pony by the name of Pixie trotted into my life, and writing was immediately relegated in favour of all things equine.

It took more years than I care to admit for me to resume my writing career.  In 2005 we moved to gloriously inspiring mid Wales.  In 2009 I stumbled across an Open University creative writing module and the rest, as they say, is history.  After completing my OU degree, I fulfilled a lifetime ambition and enrolled on an MA course at Swansea University.  The whole experience was magical.  It was like being taken by the hand and led back to a place where my imagination could run riot.

I began by writing short stories, which I love, but I always feel disappointed when I have to say goodbye to my characters so soon, and so the next challenge was to attempt a novel.   It’s been a fantastic experience, from its shaky start in a brand new exercise book, but now, finally, I have my second novel.  I still have a horse – this one’s been with me for over twenty years – but these days I seem to be able to allow the two obsessions – books and horses – to run side by side.