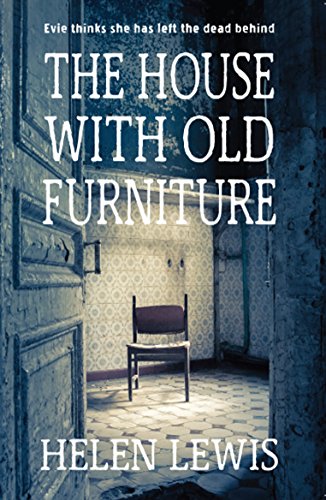 Evie has lost her eldest son, Jesse, to gang violence. Leaving the house he grew up in is pulling apart the few strings left holding her heart together. Only the desire to be there for her younger boy, Finn, impels Evie to West Wales and the ancient house her husband is sure will heal their wounds.

Days later, Andrew is gone – rushing back to his ‘important’ job in government, abandoning his grieving wife and son. Finn finds solace in the horse his father buys by way of apology. As does his evasive and fearful new friend, Nye, the one who reminds him and Evie of Jesse… Evie loses herself in a dusty 19th century journal and glasses of home-made wine left by the mysterious housekeeper.

As Evie’s grasp on reality slides, Andrew’s parents ride to the rescue. It is clear that this is a house they know. They seem to think they own it, and begin making changes nobody wants, least of all Alys and her son, Nye, the terrified youth who looks so like Jesse.

This book hooked me from the start: ” I don’t want to leave. I’m being ripped from the rock I cling to…” Right away i was in the protagonist’s heart and mind. The story of Evie Wolfe, her grief, her bewilderment, her sense of loss is threaded through the whole of The House With Old Furniture. Helen Lewis has a talent for writing phrases that evoke instant images, moods and sensations.This is rich,flowing prose.

Told alternately from the points of view of Evie and her young son, Finn, the contrast in tone is stark, yet the empathy, between the two is palpable.  The author relates many of the same scenes throughout the novel from their different perspectives, with their different voices, allowing each scene to come alive and enabling the reader to ‘see’ the confusion in each character’s mind. Yet also to begin to see the machinations of the other characters surrounding them.

All the characters are multi-layered and convincing in the roles they play, whether they live in the ‘real’ world or are more ephemeral. As a reader I found myself alternately empathetic, saddened, perturbed, intrigued, angry. The House With Old Furniture is not a book that lets the reader go so easily; I discovered it is quite easy to dust, to make a meal one -handed, to iron, with only occasional glances to see what I was doing. And to read.

The spoken dialogue defines each character to their part in the plot, yet it is so subtly written that it is easy, initially, to miss the manipulations that are woven throughout. Only through the internal dialogue of Finn and the gradual slipping of reality with Evie did the unease grow in me.

My review wouldn’t be complete without a word or two about the setting of the novel. The descriptive narrative brings alive the surrounding countryside of Wales; the isolation, the beauty, sometimes the danger, to give a great sense of place. I also love the title; The House With Old Furniture encompasses the descriptions of both Pengarrow and the cottage where Evie finds Nye and Alys.  Ah, Alys, an elusive character that I will leave other readers to discover for themselves, just as Evie ‘discovers’ her.

This is a story where a sense of disbelief has to be, and is, easily suspended. And it’s expertly brought about by Helen Lewis’ writing.

Love the cover by the way…and the wonderful inscriptions and patterns on the pages that divide the chapters.

As you can probably guess,I wholeheartedly recommend.The House With Old Furniture.